Durham Tech will be TESTING the Emergency Notification System (Punch Alert) on Tuesday, January 31 between 9-11 a.m. A series of text messages will be sent, but this is only a test. Learn more about PunchAlert 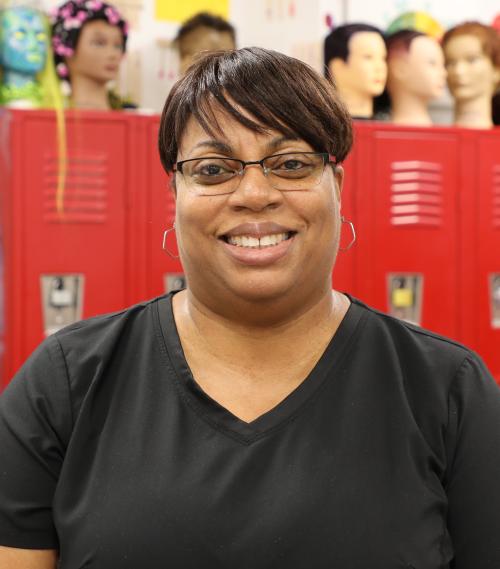 When the COVID-19 pandemic slowed down college enrollment around the country, Cosmetic Arts programs at Durham Tech flourished – growing more than 300% since 2019.

Maria Steele, Director of Cosmetics Arts at Durham Tech, said it was likely due to a growing interest in entrepreneurship after so many people lost their jobs.

“COVID affected so many large businesses, that people wanted to start working for themselves, and becoming a cosmetologist allows them to specialize in multiple areas and become entrepreneurs,” she said. “You will always be able to make money in this industry because cosmetologists can do anything. You will never be stagnant. You can always reinvent yourself. It's such a versatile field, you can be an independent contractor at different salons and do everything.”

Steele is the driving force behind all Cosmetic Arts programs at the College, including cosmetology, esthetics, and manicuring – an industry that has remained resilient through both a recession and pandemic.

Steele, a Hillsborough native, made a pact with her two childhood best friends. When they grew up, they would create a firm where Steele was a pharmacist, and her two friends were a doctor and lawyer. If anyone got hurt, they could visit their one-stop-shop to meet all their needs.

Her two friends traded places as the doctor and lawyer while Steele took a new path of her own. She enrolled in the Pharmacy program at the University of North Carolina at Chapel Hill, but later realized it was not the right career path. She changed her major to Radiologic Science and again to Sociology.

“I changed my majors three times in three years and then failed out. It was a tough time,” she said.

Steele soon made a fateful hair appointment at a salon in Durham, which catapulted her career in a completely new direction.

“I was talking to the girl doing my hair and found out she was making great money. I thought maybe I could do this too. I used to do my grandmother’s hair all the time growing up and other family and friends' hair and really enjoyed it,” Steele said.

She immediately enrolled in Dudley Beauty College in Durham. For nearly two years, she worked full-time in admissions at UNC Hospital and went to beauty school at night and on the weekends.

“It was exhausting, but I loved being in school so much that it never felt like work,” she said.

Steele and her classmates ran into a unique situation at Dudley when the instructor was suddenly unavailable to teach. Determined to continue the program, students gathered in the break room every night and taught each other the textbook material.

This experience also sparked her interest in teaching.

After completing the program and earning her license, Steele began teaching full-time at Dudley and worked part-time at a local salon. She continued teaching and working in the area until 2009 when her former coworker, Vickie Weeks, asked if she wanted to join forces to approach Durham Tech about starting esthetician and cosmetology programs.

Darlene Bullock was Assistant Dean of Continuing Education at Durham Tech at the time.

“I had a lot of questions at first, but the way the program was presented and how popular they knew it would become, I became very excited. Maria and Kamara Carpenter, another instructor, really took the program to the next level,” Bullock said.

The first cohort of students began the Esthetician Technology program in 2010. There was no space for a Cosmetology program at the time, so Weeks and Steele put 100% of their efforts into launching and growing the esthetician program.

Weeks taught daytime classes while Steele taught at night. The program was a success from the start and enrollment has increased more than 400% in the last 12 years.

After seeing the success of the esthetician program, Durham Tech was ready to launch Cosmetology.

Bullock said the addition of Cosmetology would put the College’s mark on the beauty industry.

“We wanted to dive deeper into the industry and the community was prime for this program due to the closings of many other area schools at that time. Once Maria pitched the Cosmetology program to me again, along with the success of Esthetics, I knew this program would bring success to the College and the community, increase enrollment, and entrepreneurial pathways for students. Maria has done a great job with Cosmetology, and it is growing, as is Esthetics, Manicuring, and Natural Hair,” she said.

In 2019, there were eight students in the first cohort of the Cosmetology program and today there are 35 students.

Steele said she is most energized by the success of students in the program.

“I love watching students get it and seeing the lightbulb go off. It feels great to play a role in changing people’s lives,” Steele said. “I love seeing students graduate and do well in the beauty industry.”

Students like Adrienne Dupree, who began the Cosmetology program earlier this year and said it has been life changing.

“Sometimes I think, can someone pinch me and make sure I’m not dreaming that I’m actually in school learning these amazing skills and techniques,” she said. “The instructors are some of the nicest instructors, but they are tough when it comes to my education, but that’s what I want. I don’t want to be pushed through like a number. They’re here to make sure I graduate and that means the world to me.”

Steele also wanted to leverage her own education to advance students that pursued entrepreneurship through cosmetology. After earning a bachelor’s degree in Public Administration from North Carolina Central University, Steele enrolled at the University of North Carolina at Pembroke to earn a master’s degree in Business Administration. She completed that degree earlier this year.

“I earned a business degree because I wanted to be more versatile, but also to offer our students more knowledge on the business side of running salons. Not just the skills, but helping students keep book and write business plans is really important to me,” she said.

This newfound knowledge was helpful for students like Mia Wilson, who completed the Natural Hair Care course in July 2020 and opened her own business in September that same year.

“This class was one of the best experiences ever. It opened so many doors for me. I didn’t realize how big it would be. Ms. Steele told us that we could make a lot of money in this industry and that she’s never been unhappy in this field. I took that and ran with it,” Wilson said. “I’ll take everything I learned at Durham Tech into my new business. They taught me exactly how a salon should be run.”

Steele said she would love to add Barber Services and Microblading (e.g. tattooing eyebrows and permanent makeup) to the Cosmetic Arts offerings in the future.

Steele resides in Chapel Hill with her husband, Tony.