The Dallas Herring Achievement Award was established by the North Carolina Community College System in 2010 to honor the late Dr. Dallas Herring, one of the state’s earliest advocates of community colleges. The award is bestowed annually upon a current or former student who best embodies Dr. Herring’s philosophy of “taking people where they are and carrying them as far as they can go.”

Durham Technical Community College has nominated Cynthia Wynn for the 2022 Dallas Herring Achievement Award. Cythnia said she faced a lot of adversity growing up. By 15 she was a homeless freshman in high school and decided to drop out of school. In 2006, she was a single mother and enrolled in Durham Tech to become a Certified Nursing Assistant. A few years later she became a Licensed Practical Nurse and today she is enrolled in the LPN to ADN program to become a registered nurse.

“From abuse, low-self-esteem, depression, addiction, hopelessness, homelessness, high school drop-out and single parent, to becoming a confident, happy, grateful, alcohol and drug free, full of hope not only for myself, but inside of me, I carry enough hope to share with others,” she said.

After graduation, Wynn plans to attend a local university to earn a bachelor’s degree in nursing. 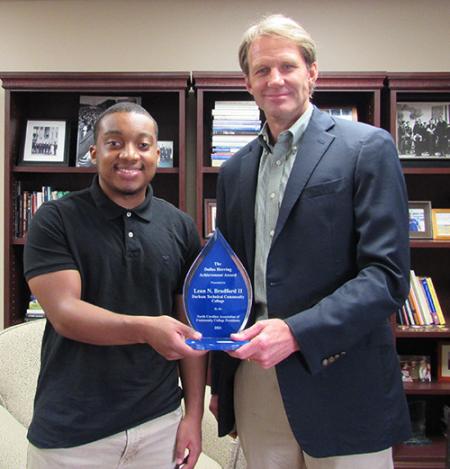 “It’s surreal, this feels like a dream,” he said. “I had to hold back tears as I expressed my sincere appreciation. I had family members in Colorado and North Carolina on the Zoom call in tears. There are so many people like me in the world. We have to keep pressing on. I am so grateful for all who have been in my corner.”

Durham Technical Community College has nominated Leon Bradford for the 2021 Dallas Herring Achievement Award. As a child, Leon's pediatrician told his parents that he would never be able to attend college and would not graduate high school with a regular diploma. His classmates called him "slow." Leon says he processes information differently, which led him to develop his own learning skills and resiliency. He proved that doctor wrong and tuned out his old classmates. He found Durham Tech at a college fair during his senior year of high school.

"Durham Tech offered the bridge I needed to get to my next chapter. The College has helped me to prove to those who said I could not do it that I can do it. It takes hard work and dedication. There are people at Durham Tech to help you. Utilize your resources, stay focused, learn from your failures and the sky is the limit." 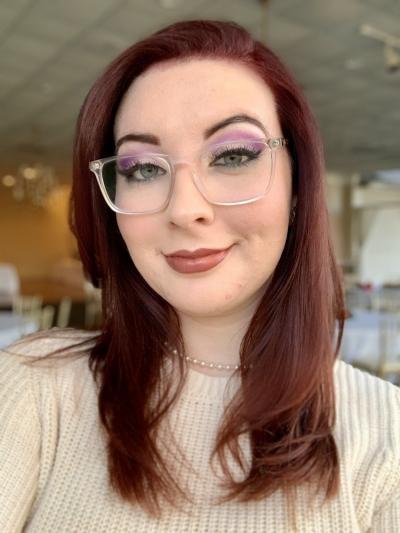 Durham Technical Community College has nominated Alexis McClernon for the 2020 Dallas Herring Achievement Award. She is earning an Associate in Arts while working working two jobs as Head Lifeguard/Lifeguard Instructor at Duke University and the Director of Pool Operations at Umstead Pines Golf and Swing Club.

Growing up in an unstable environment and later struggling with her own addictions and mental health, she decided to pursue a career as a Correctional Psychologist so she can help others.

“With the help of my supportive family, motivating friends, inspirational significant other, community of peers both at work and of course the incredible professors and staff at Durham Tech, my dreams have revolutionized into reality and I hope to one day give back the opportunities that were given to me.” 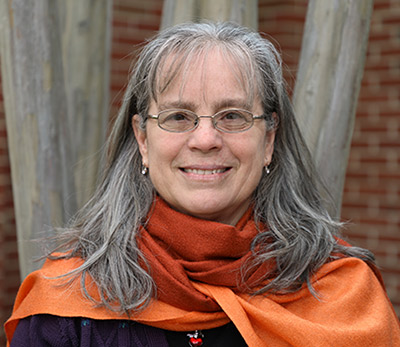 Mary Grace graduated with an Associate in Arts degree and wants to transfer to a local university to earn a bachelor’s degree that will enable her to become a child life specialist. She is also very interested in psycholinguistics and wants to use it in a way that helps lead people to non-violent conflict resolution. She describes herself as a life-long learner and anxiously awaits more adventures in education.

“Durham Tech does, indeed, accept us for who we are. You encourage us to know ourselves and offer us the tools and skills to move forward through our life’s journey.” 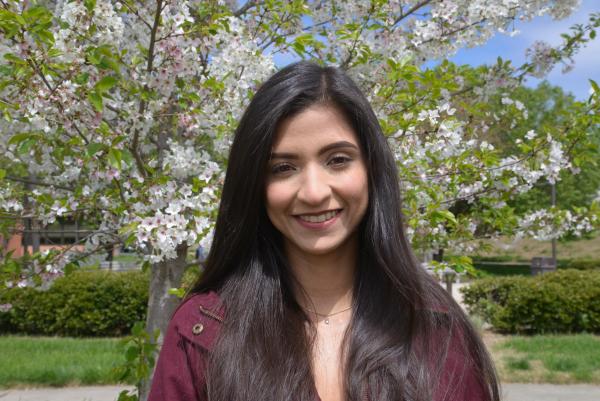 Durham Technical Community College has nominated Tailyne Guimarães Grindo for the 2018 Dallas Herring Achievement Award. Originally from Brazil, Tailyne moved to the United States in 2012 and enrolled at Durham Tech in 2013. She took English as a Second Language classes and developmental math classes before she could take courses toward her program of study.

“I’m speechless. To go from having to take developmental math to now being nominated for the Dallas Herring Achievement Award, it feels like finally someone saw all of my hard work,” Grindo said. “I’m finally achieving something I worked for.”

Tailyne graduated from Durham Tech in May 2016 with an Associate in Arts degree and continued taking courses through 2017 to meet prerequisite requirements for the Nursing Program at the University of North Carolina at Chapel Hill, where she was accepted.

Grindo began classes at UNC in May 2018 to earn her Bachelors of Science in Nursing. She aspires to work in hospital management or later become a nurse practitioner.

“I wouldn’t be where I am now without Durham Tech,” Grindo said. “I wouldn’t be at the same level as other English speakers or have the competitive grades I needed to get into UNC if it hadn’t been for Durham Tech. I’m so grateful.” 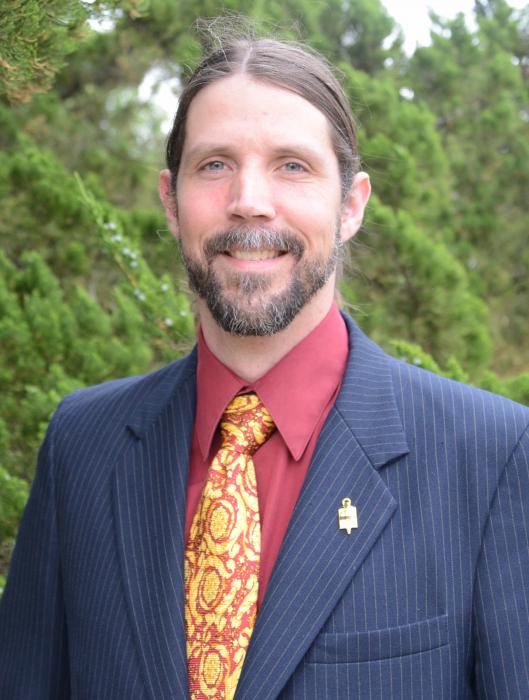 Durham Technical Community College nominated Layman Franklin for the 2017 Dallas Herring Achievement Award. At the time of his nomination, Layman was completing courses toward his Associate in Arts degree from the Arts, Sciences, and University Transfer program.

After earning his GED in 1997, Layman enrolled at Durham Tech in 2003. He left school later that year when one of his daughters was born. With his children much older, Layman enrolled again at Durham Tech in Fall 2016 in the ASUT program in hopes of transferring to the University of North Carolina at Chapel Hill for a bachelor’s degree and to eventually teach English abroad in Asia. He also plans to obtain a Teaching English as a Foreign Language (TEFL) certification.

“As a blue-collar worker towing cars, I understand the importance of a higher education,” Layman said. “Dr. Herring’s philosophy sums up why I am in college as I am here, but I want to be there.”

Layman excelled in his courses at Durham Tech. He made the President’s List and took tremendous strides to reach his goals. He credits Dr. Herring for being responsible for his ability to learn at Durham Tech and within the North Carolina Community College system.

Lisa Dawn Fowler was one of more than two dozen Durham Tech students who submitted an essay of self-nomination for this recognition. The theme of the 2016 award was based on Dr. Herring’s philosophy of “taking people where they are and carrying them as far as they can go.” Lisa’s composition rose above the rest not just for its poignant, heartfelt connection to Dr. Herring’s ideology but also because she is considered a nontraditional student: Lisa is deaf.

She admitted that, in addition to needing lots of assistance from American Sign Language interpreters in the classroom and Disabilities Services to help her with paperwork, she was, in her own words, “digitally illiterate.” She struggled to catch up with technology since instructors prefer that students submit assignments online and communicate primarily through email. She enrolled in computer courses and took advantage of tutoring and soon was sending emails and saving files at a pace comparable to her classmates.

In Fall 2014, she became aware of a study abroad opportunity that would allow her to volunteer in Kingston, Jamaica, helping students at a school for the deaf. “It was a chance to get out of my comfort zone and research deaf cultures in another country,” she said. She applied for a scholarship and was selected, despite the fact that spoken English is, in fact, her second language.

In July 2015, she traveled to Jamaica, the first and, at the time, only student from Durham Tech to participate in this program. “I benefited greatly from my work with deaf Jamaicans,” Lisa said. “My college career has rejuvenated my life and inspired me to accomplish my goals in spite of being deaf.” Making the Dean’s List in Fall of 2015 further motivated her, and on May 10, Lisa became the first deaf student to graduate from Durham Tech with an Associate in Arts degree.